John Carl Robnett Licklider was a preeminent multi-disciplinary engineer.  He demonstrated engineering abilities at an early age. He enjoyed building model airplanes and refurbishing old cars. In 1937 he attended Washington University in St Louis and triple majored in psychology, physics and mathematics. He went on to attain a PhD in Pycho Acoustics from the University of Rochester. His doctoral thesis was titled “An Electric Investigation of Frequency Localization in the Auditory Cortex of the Cat”.

His post doctoral appointment was to Swarthmore College as a war research associate in 1942. The following year he went on to the Pycho Acoustical Laboratory at Harvard to study the factors that were involved in how people verbally communicate at high altitudes between air crewmen and through aircraft radios.

In 1950, he moved on to MIT, where his work on air defense projects led to the establishment of the Lincoln Laboratories. There, he conducted the first computer experiments that were incorporated into the Semi Automatic Ground Environment air defense network, or SAGE. This work led him to learn digital computer programming as digital was faster than that of analog computing.

In 1957, he was  hired to work with old colleagues at Bolt, Beraneke and Newman Incorporated, or BBN. He was appointed Vice President and was head of several departments, including Information Systems research. He wanted computers to be more interactive and he was inspired by the graphic interface and real time response of the old SAGE terminals. He disliked how computer users had to make large sets of punch cards and how the computer took up all it’s processing time on one task.

This led to Licklider writing a paper titled “Man-Computer Symbiosis.” He discusses his own frustrations with the time consuming process computing was. He stated that computers should become not just human tools but partners, to the point where humans were the helpers of computers more than the helped. This would free people from the mundane task of calculating and allow them to follow more creative pursuits.

Licklieder then requested BBN to purchase a computer, for about 30,000 dollars. When asked why, he said he didn’t know but thought that BBN could use it for defense contract work. News spread of BBN’s interest in computer research. A computer scientist named Ken Olsen brought his PDP-1 computer to BBN to have it beta tested by Licklider. The PDP-1 was used to establish one of the first time sharing networks, a system by which four people could use a single computer at once.

In 1963, Licklider was to work briefly for the Advanced Research Projects Agency at the Defense Department. He convinced two researchers ,Sutherland and Taylor, that the network demonstrated at BBN could be used across large distances and could pool resources from different institutions. The network ARPA developed, the ARPAnet, was used to link the University of California, MIT and Systems Development Corporation with ARPA and is considered to be the prototype of the modern day internet. However, Licklider left ARPA before any of this was implemented.

Licklider returned to MIT in 1966 to run Project MAC. The project centered around a large mainframe computer that could support 30 users at once. The mainframe was used to research artificial intelligence and operating system software. The operating system the main frame used was the basis for the elements used in Unix, the first multiuser OS.

Licklider retired from MIT in 1985 and passed away in Arlighton, Virginia in 1990.

For fans of the William Gibson novel “Idoru”, her rise was foreseen. She topped the charts with a number two album in 2009 and a number one single on iTunes in 2012.  Her name in Miku Hatsune, and she is a Vocaloid. Vocaloids are synthetic music software programs that anyone can purchase and use to edit and create songs. They can then upload the song to the web or make  a CGI video with an avatar dancing and performing the song. Miku’s most popular web videos where compiled into albums and a devoted fan base developed. Americans find it strange to be a fan of a digital entity that doesn’t really exist. In an industry that auto tunes most acts anyway, there can hardly be said to be a difference.

Miku’s first viral video was of her singing a Finnish polka song “Ievan Polka” while animated in Japanese “Chibi” style, waving an onion. The plucky electro pop beat and quick lyrics are quite catchy. This is also an example of the irreverent nature of her open source contributors.

Her fan base originated on the Japanese site Nico Nico Doga, a video media streaming service. She propagated to Youtube from there and reached a larger international audience. All told, tens of thousands of users have created content for the Hatsune Vocaloid. Finding what is appealing is a matter of a short web search.  She is used quite well in the electronic and trace genres, fitting considering her electronic origins as a robotic researchers voice software. “Lost You” is a deliciously chilly progressive trance track, probably my favorite.

“Sky High” is a deep ambient piece, with a ghostly disembodied other worldliness in the vocals.

If you tire of the endless computer searches and want to enjoy an evening out, you can purchase Miku Hatsune concert tickets. That’s right, a virtual idol has live concerts. She’s projected as a hologram on a stage and performs her most popular songs with a live band. She’s had shows in Tokyo and Singapore

To get the full Miku Hatsune experience, you can buy the program and make Hatsune songs yourself. This is what is so profound about her. Anyone with talent can produce there own music and have it performed by a beloved national idol to the adulation of tens of thousands of fans any where in the world.

Where Not to Start:

Smicropus was an alternative alt rock band from suburban Dallas. They formed in the summer of 1991, the greatest summer of 90’s suburban Texas alternative rock ever. Upon completion of their first tri-city east Texas tour they debuted their first record to be like other people.  Their graphic designer was really excited to work on the album cover because he just got a second hand Macintosh II.   Copies of Smicropus’ only album can be found in a box in your Dad’s garage, probably.

This assignment  was to generate an album cover with random bits from different web sites. It called for the selection of a photo from Flickr, but Flickr seemed too restrictive in giving away pictures. It wanted you to ask and receive permission, which I can respect, but I wanted it now. So I cheated and went to a site I peruse once and a while for it’s random oddites  .  I thought the photo was too monochromatic. I added some neon colors in between the black strips using the lasso tool to ring the white and then used the paint brush to fill in the selected area. I also used the border creator to separate the black and white picture from the black background.

http://en.wikipedia.org/wiki/Special:Random  For the Band Title

http://www.quotationspage.com/random.php3    For the Album Title

http://www.flickr.com/explore/interesting/7days   For the Album Picture

This is my first DS 106 assignment. I chose it so I could  play with the image editor, Gimp. It was a good experience. It can do just about everything Photoshop can. I took an image of the city from the film Akira and adjusted the contrast and saturation to get the warm effect for the central building. I used the wand tool to remove the sky and layered a rising sun image behind the skyline. In the film, Tokyo was reconstructed as a giant artificial island in the middle of Tokyo bay. Hence the term ” city inside the bay.” 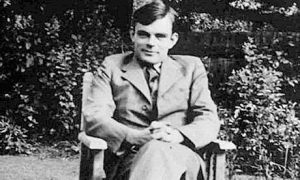 Alan Turing was absolutely one of the most brilliant scientists of the 20th century. Born in London in 1912, Turing showed early signs of genius. His aptitude in mathematics and science were at odds with the British education systems focus on classical literature and his teachers insisted that he wouldn’t amount to anything.

He could solve complex mathematical equations and he fully understood relativistic physics without study. Turing became an undergraduate at Kings College at Cambridge and in 1936 wrote a paper proving a computer could make any mathematical calculation if it were written as an algorithm. This concept is known as a Turing Machine, a universally compatible  computer that could perform the tasks of any other computer and compute anything that was computable. After studying cryptology at Princeton and Cambridge, he began working for the crpytology department in the British government at the onset of war with Germany. His first assignment was to complete a project started on Polish research, a device called Bombe, which was used to eavesdrop on the German Luftwaffe. Next, he began working on deciphering encrypted German Navy Enigma code. The sequential statistical technique he devised, called Banburism, broke the German code and was a key development in the turning point of World War 2.

After the war, Turing began work on a stored  program computer and theorizing about Artificial Intelligence. The Turing Test suggests that if an interrogator were unable to tell if he where having a conversation with a machine, then the machine was intelligent. Turing was revealed to be a homosexual in 1952. He was arrested, stripped of his security clearance and under went forced chemical castration. The government he had served and protected had dehumanized and disavowed him. He committed suicide in 1954.

I’ve spent quite a few years on the net passively absorbing news articles, youtube videos and meme photos. I wouldn’t characterize myself as a person who was very knowledgeable about  computers or programming. But I kind of feel that I should be, especially given how much time I spent on the internet. I had a lot of time over the last few months and I started reading cyberpunk novels on my Kindle. It seemed appropriate. After burning through Gibson’s Sprawl Trilogy I thought ” I should definitely get into programming!” I enrolled in some free Wikiversity “classes” to learn to code. http://en.wikiversity.org/wiki/Topic:Computer_programming. Alas, my under developed attention span faltered. I realized what I really wanted was to play an MMO. Now after much procrastination, I will make a new attempt. This time I will use Code Year. http://codeyear.com/ Code Year’s structure is more gradual. You sign up and each week they will send a lesson on programming. 2012 will be the year I learn to code.